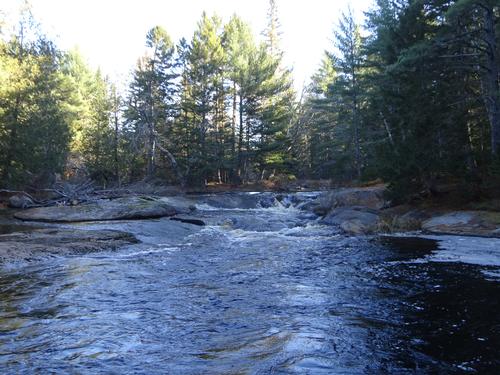 This trip was mainly a road trip, but there was some walking and hiking involved as well.

This was a two-day trip, with an overnight at the Calais Motor Inn.  The hotel is so cheap they don't even have a website.  LOL

On the first day of the trip I left the pavement in Princeton and headed west on the Stud Mill Rd to the Clifford Lake Rd, stopping at several lakes along the way.I returned to pavement on Rt. 9 and headed east to Calais.

I took advantage of the afternoon daylight I had left and walked the Waterfront Walkway in Calais.  This is on an old rail bed, and I continued beyond the walkway onto the railroad tracks past the Milltown Dam to the railroad bridge that crosses the St. Croix River into Canada.  I turned around and retraced my steps back to downtown, and walked around a little more.  My roundtrip walk on the walkway and railroad tracks was about 3 miles, with an additional 0.5 miles walking around downtown.  My total time spent walking was 1 hour 25 min.  After the walk I headed for the hotel.

In the afternoon I hiked up to the site of the former fire tower at Washington Bald Mtn.  Not many people go to this spot anymore.  The trail up kind of sucks.  The hike up to the summit is about 1.5 miles, going up around 400 feet.  The elevation of the mountain is 982 ft.  It took me 40 min. to reach the summit.  Views are very limited.  I explored the summit area for 1 hour 10 min.

The landowner had the fire tower and fire watchman's camp removed in 2007.  :(  At the end of the pictures I've included what the standing tower and camp used to look like, and also a picture after they cut the fire tower down.  They cut the legs and just let it fall!  :(

After Washington Bald I continued west, stopping at various lakes, ponds, streams and rivers along, or to the north of, the Stud Mill Rd.  My useable daylight ended around mile marker 21.  By the time I drove the 21 miles to pavement at the western end of the Stud Mill Rd in Costigan it was pitch dark.  From there I headed back north to home, stopping at the 95'er in Howland for supper.

Over the course of the two-day trip I drove a total of 445 miles, with about 105 miles of that on woods roads.  It is hunting season, so there was a fair amount of road traffic in the woods, but I did not have any direct contact with any other people while in the woods.  I also did not see much for wildlife.

As with most of my trips, I take plenty of pictures..  320! I was able to narrow it down some for this report, but there are still plenty here to see.

There are 170 photos in Album (Note: Move mouse pointer over larger pic and click on NEXT for better viewing)