Number 9 Mtn - plus a waterfall 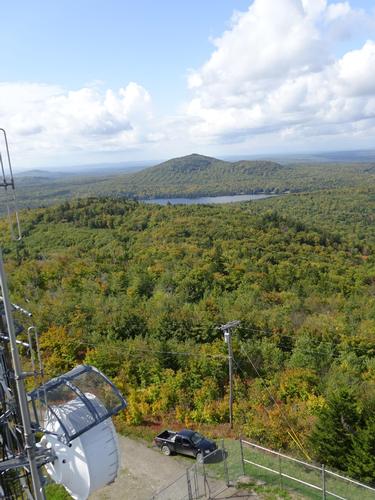 No hiking on this trip, as I can drive up Number 9 Mtn.  The elevation is 1,638 ft.  I did stop at a waterfall along the way, but that was a very short walk from the road.

The tower on Number 9 Mtn is kind of unique.  It was a combination GAP filler radar site and fire tower.  It was used as a radar site for the military back in the late 50's to mid 60's.  I think by the late 60's that type of radar became obsolete.   Later, the Maine State Police and others used the tower as radio repeater site.

On a clear day there is a nice view of Katahdin, but that wasn't meant to be today.  :(  I could see it, but pointless to try to take a picture.

I had planned on going to another waterfall after going to Number 9 Mtn, but with threatening clouds, I decided not to.  I probably made a good call as it down poured at about the time I wanted to go there.

This trip was shorter than some of my trips.  94 miles total, with 27 miles on woods roads.

There are 60 photos in Album (Note: Move mouse pointer over larger pic and click on NEXT for better viewing)