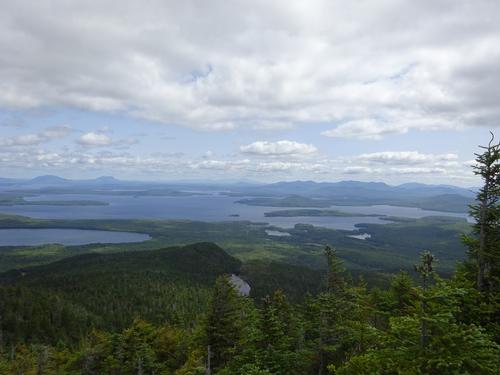 From Cape Cod earlier in the week, to Mooshead Lake at the end of the week!  I did get around on my summer vacation this year. :) I did enjoy Cape Cod, and would go back if another opportunity were to arise, but I must say the Moosehead area is more my style, and feels like home.  :)

I've been online friends for years with a guy named Bill who is into fire towers.  A few years ago another Bill, who is also into fire towers, became my Facebook friend.  Those two Bills are also friends!  Our schedules finally coincided so that I could meet them and go hiking.  Just incase anyone is wondering, they are both straight, and kind of redneckish!  But to be honest, I have some redneck ways myself.  LOL

I thought two Bills and a Billy would make conversation complicated, but it really didn't.  I camped out in my tent at a camp leased by the older Bill.  He and his family have been going to that location on Moosehead Lake since the early 1960's!!  Unfortunately this is their last summer at this location as the property is being sold.  :(   They said they would find other accommodations in the area, but it will never be the same.

The weather was very warm and humid on this trip until late Sat. afternoon.  Thurs. night was VERY humid.  When I went to bed around 11PM, the outside of my tent was all wet, and it had not rained since I set it up!

On Fri. 8/13 I helped the Bills out with a replica fire watchman's camp they have been working on for a few years.  This spot also has the original steel of the fire tower that was on Big Squaw Mtn, now named Big Moose Mtn.  Big Squaw Mtn was the first "official" fire tower in the country, but there were a few others prior to that, mainly owned by private landowners.

The camp was wired for electric lights that hadn't been installed yet.  The original camp did not have electricity, and for the opening ceremony the following day they wanted the wires hidden from view.  My job was to hide the wires, but still keep them unusable for when the lights are installed in the future.

When we were done with the camp, we headed to the Little Moose Mtn loop hike.  It was very warm and humid, and I'm glad we were under cover of trees.  Any amount of time spent under the sun would've been very uncomfortable.  I'd say the temp. was close to 90!

Little Moose Mtn is a nice loop hike, going along the shore of Big Moose Pond, and up to a couple of viewpoints, and down to Little Moose Pond.  The loop is almost 4.5 miles, with a total elevation gain of around 450 ft.  It took us 2 hours 40 min. to complete the hike.  There were only a few other people on the trail.

On Sat. 8/14 was the short opening ceremony of the replica fire watchman's camp.  There was a small crowd there.  The weather that morning was showers, but not all out rain.

The weather cleared up a little later in the afternoon and we headed for a short hike to a fire tower on Williams Mtn, in a somewhat remote area near Jackman.  The two Bills crammed into my truck and we made the 50 or so mile ride there.  Neither one of them had much legroom, but they were the ones willing to sit that way.  No way would I sit that way for a 100 mile round trip!

The trail up Williams Mtn is easy.  The distance up the trail was around 1.4 miles, going up about 615 feet in elevation.  It took us 38 min. to reach the old fire watchman's camp at the summit.  The total hike time was 2 hours.  Just us on this hike.  We spent some time looking around the old camp.  I climbed the fire tower while the two Bills kept their feet on the ground!  I do believe the fire tower and fire watchman's camp were built in 1911.  The cabin is still in good shape for its age.  I think in the 1990s the roof was redone by a local snowmobile club, which has increased the life of the camp.  The wooden fire tower cab has seen better days, and I'm surprised it is still on the tower.  I sure had to watch my step in that!

After the Williams Mtn hike we took a different route back to paved roads.  There was a spot were I wanted to play on the railroad tracks!  LOL  :)

On Sun. 8/15 the weather had changed dramatically.  :)  Much cooler and less humid.  We hiked up Big Moose Mtn, which is the location of the first " official" fire tower in the United States.  The steel structure was moved to the Moosehead Lake visitor's center years ago and a new cab constructed.  The replica fire watchman's camp is based on the now collapsing fire watchman's camp at Big Moose Mtn.

The hike up Big Moose Mtn is basically moderate.  You gain most of the elevation in the last 0.7 miles.  The hike up Big Moose Mtn is 2.2 miles, with an elevation gain of around 1,850 ft.  We reached the summit in 1 hr 38 min.  We were at the summit viewpoints for a while before heading back down.  Total hike time was 3 hrs 52 min.  The views out over Moosehead Lake from the several summit viewpoints are EXCELLENT.!  For the most part there are views in all directions from the many viewpoints.  There were plenty of people around on this hike, and we met several people coming up while on our descent.  Dogs seemed to be popular on this hike.  Some dogs like to lick my legs!  LOL

After Big Moose Mtn, we went back to Bill's camp, and I took down my tent and packed up for the drive home.

On the drive home, I took a ride on the KI Road across the Katahdin Iron Works/Jo-Mary Multiple Use Forest.  AMC owns a lot of land in this area, and has two lodges.  I found an out of the way spot on an overgrown road that has nice views of the mountains.  A nice spot to bring a partner and do "whatever" you want, because nobody would ever show up to catch you! :)  LOL  At the end of this stretch I passed by Katahdin Iron Works.  I took one pic from my truck.  If anybody wants to see more pics of the Iron Works, go to my profile, click EVENTS, click Events Lead, and go to Gulf Hagas - Grand Canyon of Maine.

I was lucky to be near the scenic view of Katahdin on the interstate near sunset, so I was able to stop and get some good sunset pics with Katahdin in view.  :)

Even though the weather was hot and humid for most of this trip, I had a good time.  The hospitality of Bill and his sister's.  Several nice sunsets.  Several chocolate milkshakes.  Talking to a guy from Ohio on the boardwalk in Greenville. I took a pic.  :)  I think he is gay, but he had to leave before I could pursue further with that.  :(

There are 280 photos in Album (Note: Move mouse pointer over larger pic and click on NEXT for better viewing)