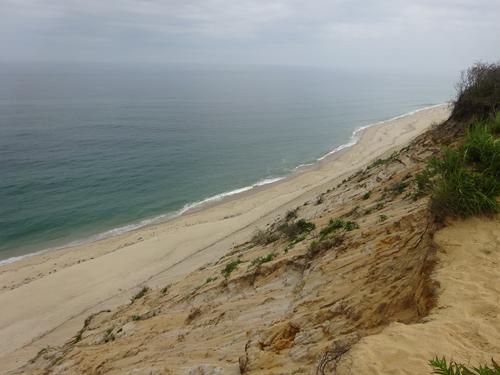 Brian - btmitch on GO - was going to Cape Cod for a week.  I had already made plans for Aug. 12-15, but not for the other days of my vacation.  I asked Brian if I could come down and stay with him on Cape Cod for a few days, and he said yes.  :)

This trip was way out of my comfort zone, as I rarely leave northern Maine.  There is no traffic or lots of people in northern Maine, and I'm not used to either one! My fear of driving in traffic on I-95 around Boston wasn't as bad as I thought and I survived the long drive from home.  I arrived in Hyannis on the eve. of Aug. 7, and we stayed the night there.

Next we went to the Lowell Holly Reservation in Sandwich & Mashpee.  There are some nice trails there along Wakeby and Mashpee Ponds.  The weather was warm, but when you hike shirtless, it is more comfortable.  :)

After the Reservation, we headed to a cottage in Wellfleet that Brian had rented for the week.  In the eve. we walked out to the beach at Great Island just after sunset to see what was there.  It was cloudy, so no nice sunset.  :(

Brian was actually on a working vacation, so day 2 (Aug. 9) I was off on my own.

I stayed close to Wellfleet exploring the Cape Cod Natl. Seashore.  There is a remote spot at the top of a high bluff north of town with an excellent view out over the ocean to the east.  A long drop down, so no beach access from this point.  I only met one group of people on this short hike, and that is what I like.

I drove south of Wellfleet to another remote spot just a short walk from the road near the Seashore headquarters.  I was hoping to access the beach at that location, but the area near the beach was closed because of nesting birds.  :(  No other people at this spot at all.

After that I headed to the Marconi Station site.  I explored the paved path to the lookout there and continued off the paved path along the bluff.  It was here that I found a steep drop down over the bluff to the beach.  It was tricky, but I made it without falling down, and with minimal sand in my sneakers.  This spot is kind of remote, but right next to the Maguire Landing beach in Wellfleet.  After visiting the beach I headed back up the steep slope.

Day 3 (Aug. 10), Brian and I took the bus up to Ptown to explore for 3 hours before I headed back home.  I wanted to go to the Pilgrim Monument, but it is closed on Tuesdays.  :(  We took a shuttle bus out to Race Point Beach. The driver was gay and we had a conversation with him.  He used to know some people in Houlton, Maine; which is not far from where I live!  We took another shuttle bus back into Ptown.  That bus driver didn't speak hardly at all.  We walked out on the breakwater a ways and walked around Ptown for a while.  We stepped under the famous dock at the Boatslip Beach Club!  I guess all the excitement there happens after the sun goes down!  LOL  From there Brian treated me to brunch at Betsy's.  :)  Very good food.  :)  After brunch we walked up to the Monument parking lot and continued to the AIDS memorial at the town hall.

My plan was to leave Wellfleet for home around 1:00, but it ended up being 3:00.  Staying another night really wasn't an option, so I headed out knowing I'd most likely hit the Boston area around 5:00!  As I suspected, I hit the Boston area at 5:00, and had to deal with stop and go, bumper to bumper rush hour traffic at two locations.  I hated it! :(  But I survived. :) Once I was away from the Boston area traffic was fine.

Cape Cod was a completely different world to me.  Life in northern Maine is rather quiet and uneventful.  I'd like to thank Brian for letting me hang out with him for a few days, and giving me the opportunity to experience a part of the world I've never seen or experienced.  :)

There are 233 photos in Album (Note: Move mouse pointer over larger pic and click on NEXT for better viewing)