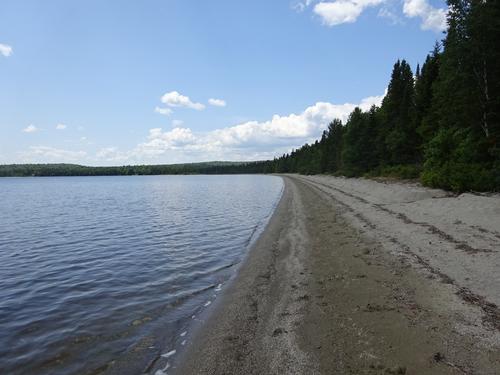 This was mainly a road trip, so no hiking, but I got out in plenty of spots to stretch my legs and check out the scenery on my way to the beach at Ross Lake.

The official name of the lake is Chemquasabamticook Lake!  Say that 10 times fast!  I can't even say it one time slow!   LOL  Not sure where the nickname Ross Lake came from.

Even though I've been to Ross Lake a few times, I've never been to the beach at the north end.  I noticed it while checking out satellite images a year or two ago, and figured it was time to see it in person.

When I arrived at the Ross Lake Campsite and found nobody there, I thought "maybe" I might be alone after all.  I had lunch at the campsite and walked down to the boat landing from there.  When I arrived there was 3 pickup trucks parked along the shore and a group at the beach.  We spoke for a moment and I continued on past them.  Plenty of space, and still fairly quiet, even with the group there and a floatplane landing nearby!

I spent almost 1 hour and 40 min. at the beach.  The water was fairly warm and you can walk out a fairly long distance from the shore.  Pretty nice beach weather day.

After that I headed back east to civilization, taking a few different roads than on my drive to Ross Lake.

With it being a Saturday, there was a small amount of road traffic, and a few people around.  Life is fairly quiet in the North Maine Woods.

The only big animal I saw was a deer.  I saw several partridge, and almost knocked off two of them with my truck!  They have wings, so why should I have to swerve to avoid them, and potentially end up in the ditch?! Also a few rabbits and other small critters running across the road.

There are 103 photos in Album (Note: Move mouse pointer over larger pic and click on NEXT for better viewing)